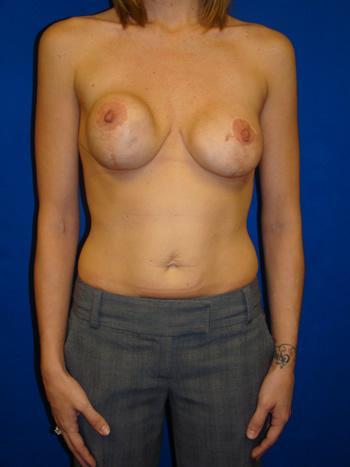 The Surgical Procedure
For correction of capsular contracture, the procedure can take from 2 to 3 hours, depending on the severity and complexity of the encapsulation. Open capsulotomy, a surgical corrective procedure, involves removing the scar tissue encapsulating the implant, releasing the tension around the implant caused by capsular contracture. Board Certified Plastic Surgeon, Dr. Pousti takes his time in the operating room to make sure that he does what he can to achieve the patient’s results.

What To Expect After Surgery
Pain is rarely strong, more commonly being a degree of discomfort. Swelling occurs but usually begins to subside by the third or fourth day. Some degree of swelling may persist for longer periods. A well-fitted bra is worn day and night for three weeks. While there is probably seldom interference with future breastfeeding, women are cautioned that it may not be possible to breastfeed in the future.

The surgical bra is used to stabilize the area after the repairs are made.